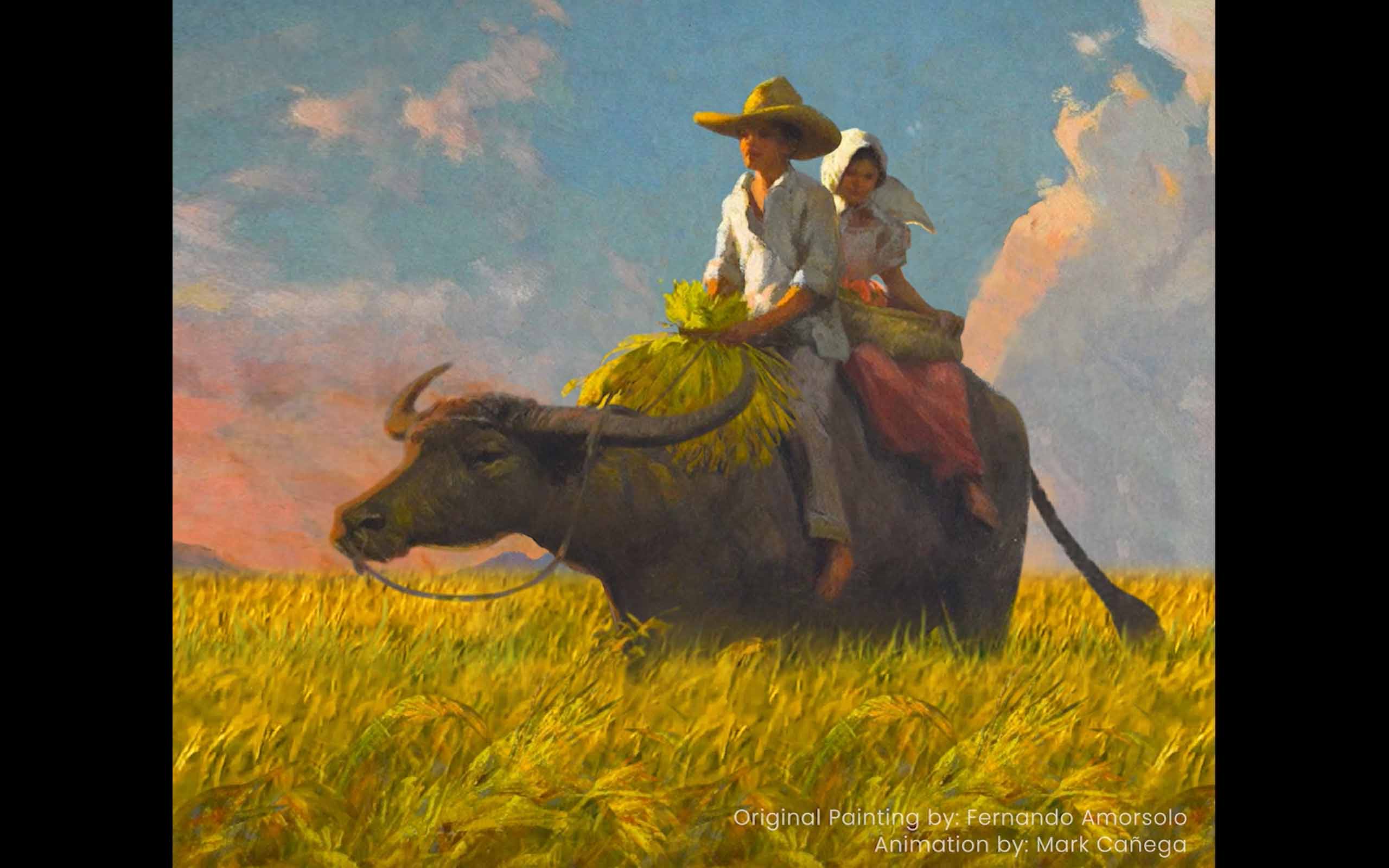 “They animated an Amorsolo? Wow!”—this was the reaction of Simone Gavan, a grade 12 senior high school student of San Beda Alabang when he saw the video that went viral, of a painting of National Artist Fernando Amorsolo.

“Couple riding a carabao during sunset” was made by Mark Cañega, a part-time teacher at De La Salle-College of St. Benilde. He made it under the school’s Animation Program, where he too was a graduate.

“I was struck at how well-animated the painting by Amorsolo was, considering the animator had only one frame to work with,” Gavan said. “The kundiman music effortlessly captures the somber atmosphere of the painting, providing a slow and slightly melancholic value to it.”

Another grade 12 senior high student, Casey Merritt from Angeles City Science High School, said, “The animation reminds me greatly of our trips to our grandparents’ place in Infanta, Quezon, where rice fields would stretch for miles.” Animating Amorsolo’s painting is a brilliant idea, Merritt said. She added how animator Mark Cañega made an experience out of the painting, especially now we can see artworks only through our gadgets, “I hope he pushes through with his plan on animating more Amorsolo pieces.”

Cañega made this personal work during his free time. “It is somewhat my kind of escape or stress reliever from working on ‘real-work’ projects,” Cañega said in an email interview with YOU. “It’s different when you work on something that’s all for yourself, from concept to the final look; it’s all yours and that is so fulfilling.”

Ateneo de Manila senior high school grade 12 student Duke Campilan said, “The animation does a pretty good job of capturing the subtle movement Amorsolo tried to incorporate in his paintings.” Though Campilan has seen other moving paintings of Amorsolo done by other artists, he thinks this one is better executed. Campilan said he likes the lyrics of the music used—“Sa sulyap mo” by Diomedes Maturan. “It really captured the emotion there might be between the two characters in the painting.”

“I came up with the idea of animating Sir Fernando Amorsolo’s masterpiece last year,” Cañega said. His original idea was to create a series of animation of Amorsolo’s works so museum-goers could still enjoy the masterpieces through their smartphones, since people can’t go out and enjoy gallery visits in this pandemic. “His works gave me the motivation to become more interested in art as I grew older.”

Cañega chose the painting “Couple riding a carabao during sunset” because it touched him—how it showed how love and life was back then, the idyll of the old Philippines. “Life was so simple, yet elegant,” he said.

Cañega explained that all the elements of the scenery captured all the emotions and feeling that can bring people back to the old times—nostalgia to make one escape the present. “Especially this time of pandemic where everyone’s mental health is affected, a simple nostalgic moment can lift someone’s heart and soul.”

It took Cahañega three days to finish everything, done during his free time. “The hardest part was separating each element on the scene, from the carabao to the characters, the grass and the background.”

He explained that it was tricky repainting some of the parts. “I needed to be more careful to maintain the authenticity and traditional look as much as possible. Because messing around with the details will lose the point of animating the original artwork.”

Fine Arts student Wika Nadera from the University of the Philippines Diliman, who has made animation of still art as well, said, “The animator was able to visually retain or even enhance the atmosphere of the Amorsolo painting.”

Amorsolo’s works capture the idyllic spirit in the Filipino’s everyday life. Nadera added, “I find it very refreshing to watch one of his renowned works animated.”

But aside from nostalgia, Nadera said that he hoped this could bring greater awareness of what’s happening to our farmers and land. “What they’re going through is definitely not as bright and optimistic as portrayed in the referenced painting,” he said.