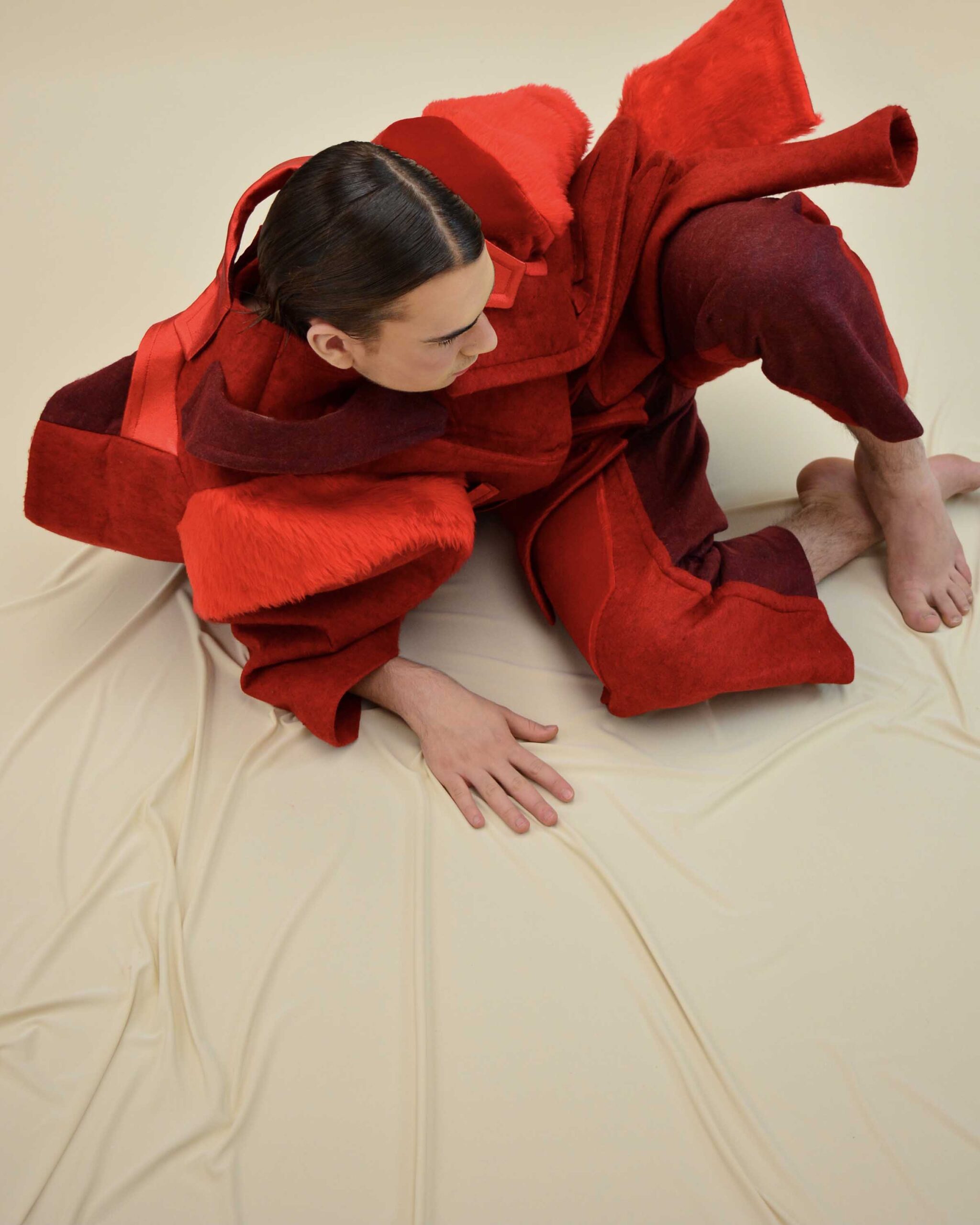 It’s where the world is now—a mix of chaos and harmony. He uses geometric shapes

For Paris-based Filipino fashion design student Jude Macasinag, everything is back to normal, it seems, for his school, Institut Francais de la Mode, has been already back conducting face-to-face classes since August 2020. Though Macasinag said they still have online classes, some subjects require face-to-face sessions.

In a recent actual class, he and his classmates were tasked to experiment with a design that transformed the ordinary jacket and trousers suit using geometric shapes—not limited to circles, squares and triangles.

“My initial inspiration was the tangram, a large square toy puzzle that when chopped up into other basic shapes and rearranged, other figures would emerge,” Macasinag said.

He recalled that it was one of his first toys. “I applied that act of permutation to my initial creative process, deconstructing vintage suits and finding new ways to recompose them on the human body into something interesting.”

Macasinag went deeper in his research by looking at works from various Filipino creatives, specifically the photography duo of Cenon and Mav, also Patricia Perez Eustaquio’s tapestries of abstract interpretations of Philippine masterpieces.

Certain challenges cropped up mostly in the technical aspect of the garment, Macasinag admitted. He used double-faced felt fabric, which is not often used in clothing since it’s very thick and not easy to sew. One associates the fabric with the Muppets; Macasinag, in jest, called the piece “If Elmo of Sesame Street and Frankenstein had a child.”

The process was time-consuming, since the whole ensemble was asymmetrical, entailing the use of numerous pattern pieces for the different layers of construction.

Another challenge Macasinag faced was finding the right balance between chaos and harmony within the garment. “The garment was meant to confuse the eye, yet also make the viewer still feel as if it was whole.”

The piece also had to be wearable, since it’s not a soft sculpture but rather an actual garment.

He was able to pull it through, and the result is a multi-textured jacket and trousers that show the multiple facets of shape and construction.

“One of the key points this garment reminds me of is liminality — being in the in-between of things,” Macasinag said. “In terms of my craft, I still find myself in the middle of my past body of work in Manila, which included opulently decorated evening wear, and the more experimental work I want to produce here in Paris.”

Macasinag adds that this recent creation is far from the gold gown he made for a Miss Universe Philippines candidate a few months back. “I’m moving to make work that’s less direct, less literal, and, perhaps in the Philippine fashion environment, less mainstream-accepted, while still retaining a contemporary Filipino approach in research and practice.”

He said, “In the bigger scheme of things, this liminality is where we’re at right now.”

Macasinag explained that we’re all just waiting in the midst of chaos that is the pandemic, but we’re starting to see the better side with the vaccines starting to roll out in every country.

“This garment isn’t really meant to tend to our clothing or visual needs as of the moment, but with us wearing sweatpants for almost a year now, I think this garment is just waiting to be worn when it gets the chance later.”