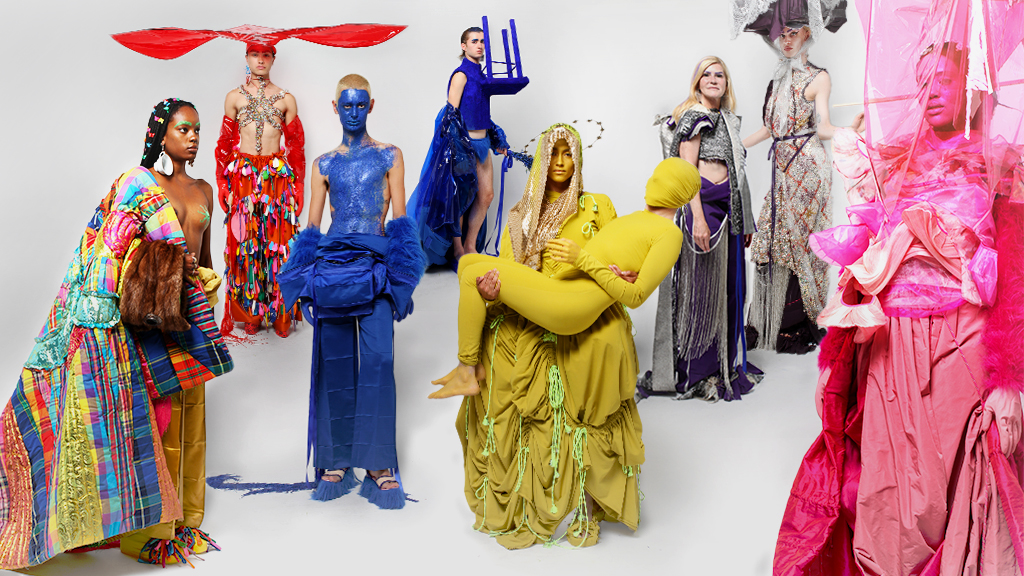 “Academic.” This was the word some of the professors of Paris-based Filipino fashion design student Jude Macasinag, 22, used when he showed them his mini-book of his graduation collection at Institut Francais de La Mode.

Macasinag said that making a book he titled “Manifesto” wasn’t really required in producing a collection but since he is making a collection so complex, “The best way to talk about it was like how I would write for my thesis,” Macasinag said. “My studies in Makiling (Philippine High School for the Arts) really helped me,” he added.

It has been three years since Macasinag moved to Paris to study fashion design, he is also the only non-European student that has a scholarship in merit for the Bachelor program.

Macasinag made six looks which he preferably calls his “six characters” for his graduation collection: The Collector, The Nomad, The Builder, The Homemaker, The Creative and The Citizen— acting as muses, these fictional characters draw from different chapters and experiences in Macasinag’s life to form the narrative that is his collection.

The collection delves into themes of self, longing, family, uncertainty, joy, loss, grief— elements that make us human. So for Macasinag, there is no better reason to design than to tap into the “human” side of why and how we wear clothes, “The collection is akin to a diary, however, its contents are not made specific, and thus are, hopefully, universally relevant,” Macasinag explains.

“As a child, I would hoard miscellaneous tiny objects which drew my interests—rocks, fragment of fabrics, balloons, stuffed toys, and art materials—which created clutter around the house, irking my parents.”

“When I was 12, I left my parents’ home to study in a boarding school. I gained as much knowledge and skills as I could, before heading heading out to an uncertain direction.”

“Moving to France in 2018 has created a hybrid in my cultural consciousness—I have adapted to the country, and am slowly viewing it as a new home, in addition to that of mine in the Philippines.”

“Representative of The Homemaker is the Pieta, a religious sculpture which I have seen all throughout my upbringing. Our own Pieta, a family heirloom, was often used in local religious ceremonies and rituals.”

“The Creative discusses one’s artistic endeavors, and how he continues to learn and unlearn the knowledge and skill in devotion to his craft. Spending six years in an arts-focused school and also already studying fashion before coming to France, I found it a challenge to deconstruct and dismantle my preconceptions in the field of fashion and art. Unlearning is a learning process in itself, and it is only when one unlearns that one finds a new perspective.”

“The Citizen is representative of the constant regeneration of oneself in society. Who and how a person is never static, and is often the result of several influences he encounters in his daily life.”

But for his favorite piece, Macasinag said it’s, “The Homemaker.” It is one of his unexpected pieces, he said, “I spent months trying to plan a design for that look, but I couldn’t start executing simply because I was not yet convinced. It ended up being one of my most spontaneous outfits.”

The result was a garment that felt very organic. It was also a piece that was closest to home—directly inspired by the Pieta, a religious statue currently kept in his grandmother’s home. “I kept seeing the image while doing research after my grandfather’s death, so I dug into its history and importance within my own family. It definitely leaves a mark.”

His collection was also picked to be part of the official Men’s Paris Fashion Week where France First Lady Brigette Macron was in attendance. “It’s exciting to show in Paris Fashion Week. But somehow I’m not magnetized towards the label of “PFW” and being able to do a show. Whether PFW or not, what’s important for me is that my work is being shared with a good audience, and that it (whether the clothes or the content behind them) is accessible.”

Macasinag felt he “graduated” with flying colors, “I feel free. Free in the sense that I know I am equipped technically, culturally, and personally to create and make meaning through what I do,” he said. “Living in an environment like Paris during the formative years of my creative education gives me confidence in the statements that I want to impose via my work.”

Macasinag is now focused on getting in the school’s MA program and hopefully get a scholarship as well. “I feel like there’s still plenty to witness in an industry like fashion, whether within or beyond its glitter-studded façade.”

As a student who has grown to not necessarily be part of what’s established and not be hemmed in by the restraints of the industry, Macasinag feels that there is a deeper understanding of the reason why he does what he does—“It’s a matter of making that understanding be felt and realized by other people too.”

I just discovered this ‘holy grail’ in makeup September 14, 2022