What Aika, Tricia, Jillian Robredo are really like—daughters of a hands-on mom 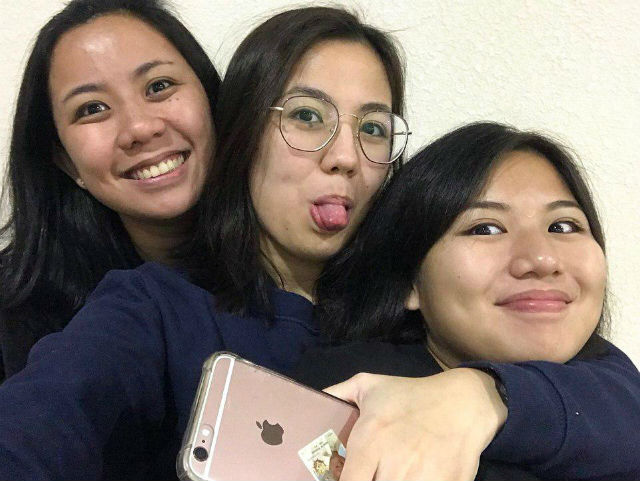 Three inspiring sisters, who are quickly making names for themselves in various fields, are starting to capture the hearts of Filipinos.

The panganay, Aika, serves as executive director of Restart Microenterprise Inc. (RestartME), a microfinancing non-profit that extends financial and non-financial assistance to poverty-stricken individuals affected by natural disasters. Through RestartME, recipients are able to bolster their savings, pay loans, and decrease their risk exposure even amid their uncertain circumstances.

“Pre-pandemic, we’d usually come in after a typhoon or an earthquake. We still have existing projects in Marawi after the Marawi siege… Basically anything that causes economic disturbances to microentrepreneurs. Our goal is to really help them get back on their feet,” Aika told TheDiarist.ph and You.com.ph in an online interview last October 27.

The second sister, Tricia, passed last year’s physician licensure examinations after graduating from the Ateneo School of Medicine and Public Health in 2020. Since then, she has been engaged in frontline work, most recently participating in Vaccine Express initiatives for Aeta communities. Before our interview, she had just come home from a hospital shift.

The youngest, Jillian, obtained a full scholarship in 2018 to pursue a biomolecular science degree at New York University (NYU) in New York. She is pursuing a double major in mathematics and economics.

It’s remarkable to see how much these three Filipinas have already accomplished through hard work and constantly striving towards excellence. They’ve come a long way from their childhood in Naga City. In our interview, these young achievers were in constant praise of the person who served as the driving force behind their success: their mother, Vice President and presidential candidate, Leni Robredo. You don’t have to look far to see the profound influence VP Leni has had on the work ethic and drive of her three daughters.

Asked where this infectious Robredo energy comes from, Tricia pointed to the example of her late father, Local Government secretary and good governance icon Jesse Robredo.

“Our dad was like that. The adrenaline would prompt him to go out and help people. It rubbed off on Mama,” Tricia said.

Aika added, “I don’t think Papa would have turned out to become the public servant he was if Mom was not his partner. A huge credit goes to our Mom.”

Growing up with future VP

VP Leni would sleep from only 4 to 7 a.m….She would rise early to greet and oversee frontliners

From tutoring Aika during lunch breaks in Naga to sending inputs on econ homework to Jillian in New York half a world away, VP Leni apparently lives up to the claim of the Robredo sisters that their mother is truly the most studious one among them—always assisting with assignments, pushing them in piano lessons, and supporting them in swimming lessons. This hands-on, “tiger mom” mindset is something the VP has carried over to the vice presidency. Tricia shared the detail how VP Leni would sleep from only 4 to 7 a.m. at the height of the government’s COVID response. She would rise early to greet and oversee frontliners.

Even if she is hands-on in leadership, the Robredo siblings admire VP Leni for the fact that she was never an absentee mother. When asked about which accomplishment of the VP they are most proud of, Jillian answered, “On a more personal level, she can still balance being a mom and being the Vice President. Hindi nawala yung presence niya sa buhay namin.”

Aika added, “We still see her every day. We wait for her so we can all have dinner at the same time, no matter how late that is.”

On how their mom made the much-awaited announcement to run for the presidency, Tricia said, “When it was time for my mom to decide, she didn’t even have to tell us explicitly that she was going to run. Up until the last minute, we were hoping this was something na hindi mangyayari. Natanggap naman namin. Nakakatulong talaga to see the outpouring of support. Alam namin na hindi kami alone sa laban na ‘to. Now that we’re here, all in na rin kami. We’re not going to leave our respective classes or work, but when our mom needs us, we will be there.”

On why their mom’s candidacy was something they had to accept, the sisters made it clear that a presidential run would be taxing on all their mental health. The Robredo sisters even shared some of their personal coping mechanisms for dealing with electoral stress.

On politics and mental health

Jillian talked about the importance of little doses of self-care,   such as exercise, eating, skin care, watching an episode of “Friends”, and even taking time to cry when necessary: “Hindi naman titigil ang ikot ng mundo kung iyak ka lang nang iyak. Take some time, then after, laban ulit.”

While Aika discussed the importance of balancing mental health with responsibilities and obligations, Tricia opened up about her own mental health experience. “The last few years have been tough on the mental health of our Mom and us sisters. It’s not wrong to seek professional help if you need it. But of course, not everyone has the luxury to look for professional help. It’s important to look for things you can do on your own. For me, it helps to be productive. Other times, it’s treating yourself. Anything to get your mind off of stressful emotions and thoughts. You have to set a balance between letting yourself grieve without letting go of your responsibilities.”

What tears us apart vs What brings us together

When asked about what VP Leni’s biggest challenges are heading into this campaign, the sisters were in agreement: misinformation and fake news.

“For the longest time, ‘di ko maintindihan kung bakit andaming tao na ambilis maniwala sa fake news and unverified sources,” said Tricia. “When I started meeting more people, I realized they don’t have the same luxury of having access to information. We can’t blame them. Whatever they are exposed to in regular doses, that is what they’ll believe. Siyempre it’s frustrating that they are not cautious about what’s thrown at them, but we can’t really blame them.”

While Jillian shared that she hopes for a more conversational approach when it comes to issues and for future generations to not have to grow up in a divided Philippines, Aika said that another hurdle the VP and her supporters have to overcome is to be able to develop: “the willingness and openness to work with people we don’t usually spend our time with. Despite differences, we can find a way to come together and work together.”

Echoing the unifying approach their mother has taken in coalition-building for the 2022 elections, the Robredo sisters insist that their mom isn’t out here trying to perpetuate another cult of personality. Aika summed it up succinctly, “When we felt our Mom would run, we hoped people would not look at her as a personality. We want people to support what she represents.”

VP Leni represents the motto often associated with her alma mater: Honor and Excellence. But if it had to come down to a choice of which was more important, that choice is non-negotiably clear in the Robredo family: “My sisters and I talk a lot about the expectations our Mom has: that we have to be the best in whatever we do (wow Pokemon!). Sometimes they would express disappointment when we would come home with quizzes with a score of 8/10, but then Papa would say, ‘Mas okay na sa’kin yung 4/10 basta mabuti ka pa rin na tao.’”

According to Tricia, VP Leni had always made it clear, “Achievements come secondary to character.”

When asked to share more about other life lessons they carry from their parents, Jillian says that consistency was always key with her father: “Whatever he did from Day 1, he was consistent until the last day. With Mama, ganun din. Whether in school or at work, every day you show up with your best.”

While Aika said it was hard to pick just one life lesson, she shared, “Mama is big on empowering other people. Whatever role she takes on, she wants to be an enabler for other people to become the best versions of themselves. If we look at her COVID response with the OVP, despite limited resources, she brought different organizations together. While she was first lady of Naga City, she became a lawyer and a mother. Whatever her role is, it has to enable and empower other people to live up to whoever they are meant to become.”

Getting to interact with the Robredo sisters, it is clear that they have taken their parents’ lessons to heart. While many have praised the Vice President for her long list of achievements (and attributing them to her character), it’s undeniable that her daughters are equally praiseworthy in both respects.

The elections have been a source of stress for the youth, with many of us worrying what kind of future we will inherit. If you’re undecided on whom to vote for, weighing the accomplishments and achievements of each candidate, I sincerely hope you remember what these things are secondary to. In 2022, vote for character.