ENHYPEN: ‘The future of K-pop’ 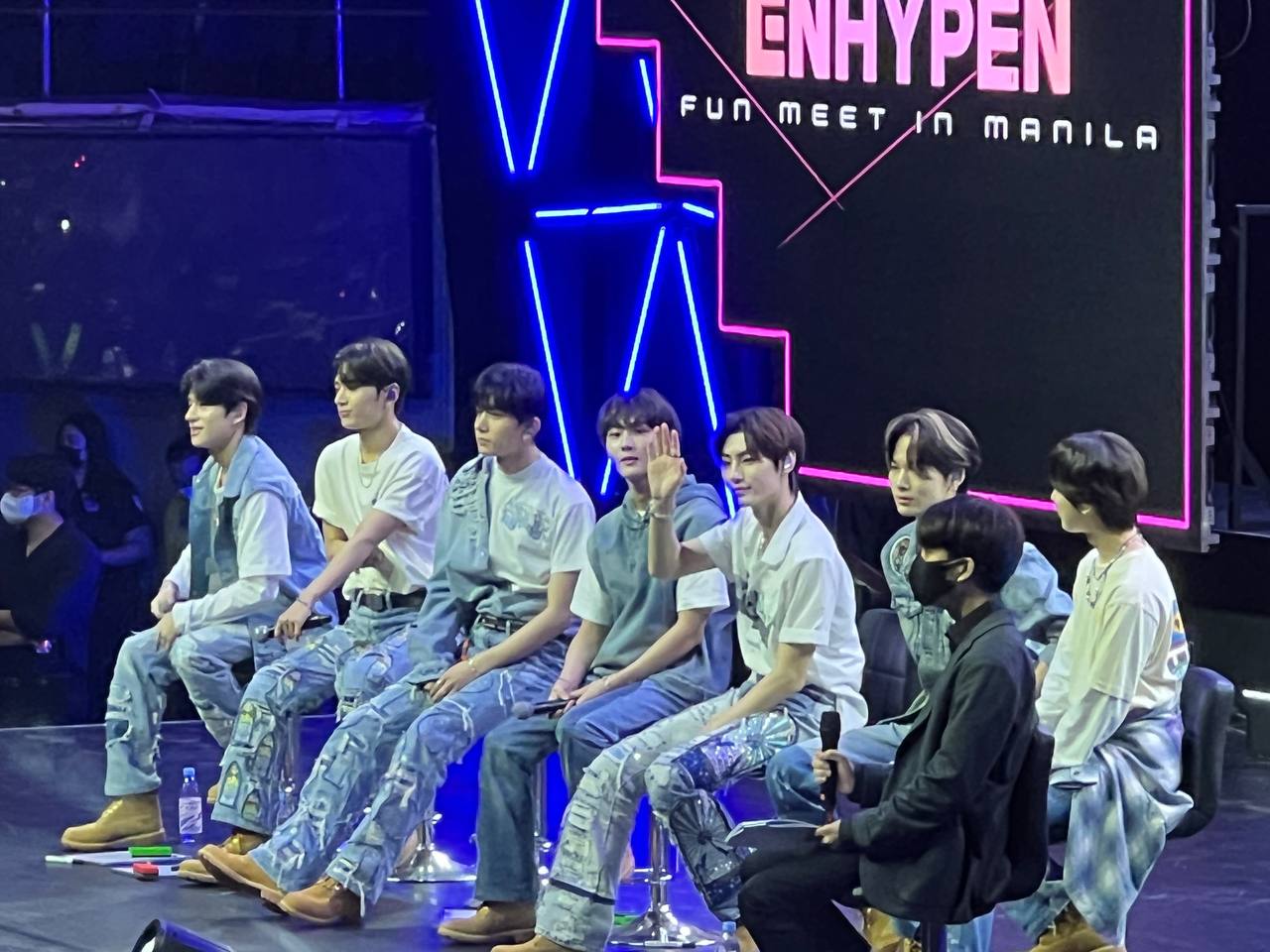 The members made sure to tell Filipino ENGENES, ‘Mahal kita! Maraming salamat!’

“ENHYPEN is the future of K-pop,” one fan cried into the microphone when asked for a message for the boys, and I couldn’t have agreed more. I was comforted by their songs during the pandemic, as were many ENGENES, and seeing them rise to the top, even visiting my country, brought me inexplicable joy.

When MC Sam Oh was interviewing the pre-selected participants of the game, she started to notice the trend of glitter eyeshadow among them, and found out they were all from the cosmetic brand’s products. The ticketing mechanics for the event included purchasing the BYS Kits, depending on their preferred ticket. The winners of the night took home special gifts from BYS, while those who found a golden ticket under their seats were not only sent to the front row, but will also be receiving a signed poster by ENHYPEN.

There were many reasons to celebrate that night, and local artists such as VXON, G22, and Darren Espanto joined in the fun meet with electrifying performances. Finally, strutting in their denim outfits, the ENHYPEN members entered the stage. The fans greeted the members with screams that lasted quite a while. The members and the whole arena sang a happy birthday song for Sunghoon and Ni-ki, who celebrated their birthdays on December 8 and December 9, respectively. “Happy Sunghoon day” and “Happy Ni-ki day” banners were set up near the entrance.

They’ll be back for a concert in February 2023

The next segment had a series of ENHYPEN-ENGENE activities. In the game called ENHY-PENS, the members wrote their favorite things on the whiteboard provided. Filipino ENGENEs got to hear the a capella version of their hit song Polaroid Love when asked which among their songs is their favorite.

Next, ENHY-PICK was a balance game where fans got to know each of the members’ preferences; surprisingly, only two members out of seven had a different answer for most of the questions. ENHY-PINOY created a core memory for fans who were holding the beach balls that were bounced around the audience when the music stopped.

The members successfully repeated the phrases taught by their Filipino ENGENES, even the long phrases. Each of the chosen fans was able to personally deliver a quick message to ENHYPEN. The last player, Jake, capped it with “Maraming salamat, Pilipinas!”

Several ENHYPEN references were spotted in the venue—for example, a fan wore a corn headdress in hopes of Jay recognizing his favorite food. But among the rest, one ENGENE declared her love for the South Korean K-pop group in the most Filipino way possible; she wore red and black Filipiniana because “Heesung is my irog.”

BYS further connected the South Korean group with their Filipino fans by playing the song called Reason–You, composed by Filipino ENGENES with a video compilation of their sincere messages and activities dedicated to ENHYPEN. Before the start of the event, several banners were distributed outside the venue for this moment. When the members turned around after watching the screen, the fans held up the banner with the sign “Our hearts beat together between the gaps of the universe.”

ENHYPEN performed their title track ParadoXXX Invasion, a rebellious song suitable for the brand’s concept that encourages the creativity of youth and to “be yourself.” The members made sure to tell Filipino ENGENES, “Mahal kita! Maraming salamat!” before leaving the stage.

We Filipino ENGENES could not contain our excitement, and promised to see the group again at their upcoming Manifesto concert in Manila at the SM MOA Arena on February 4-5, 2023.