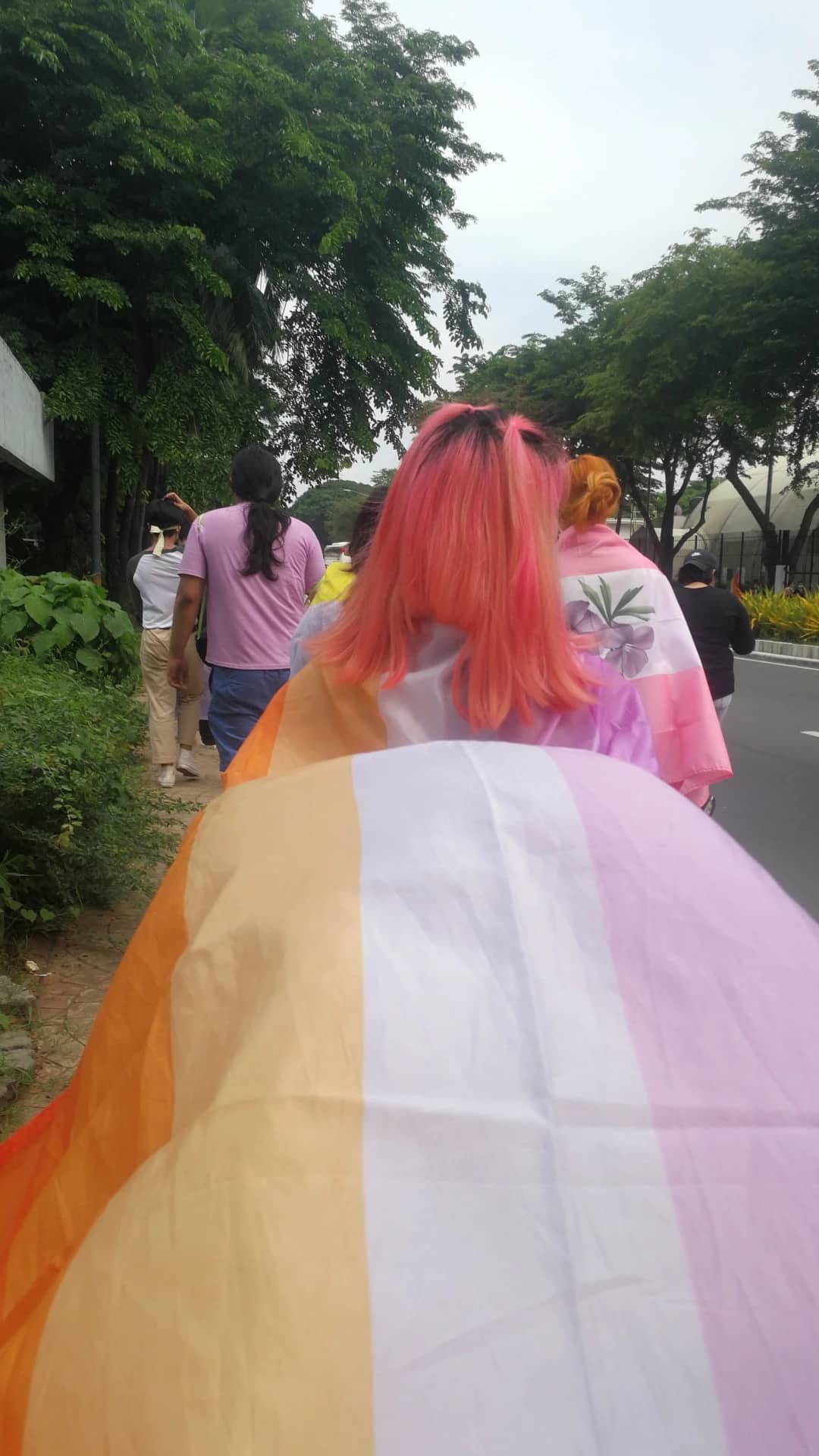 Pride is protest. The day started when the participants of the Taft Pride March were stopped by surrounding police right in front of De La Salle University for bringing around a pride flag. They were asking that the flag be folded, and when the police were asked for an explanation, they did not have one, and only cited the Anti-Terror Law. The police also mentioned that the group needed a permit when there was no active protest/program ongoing, and we were only on our way to an educational discussion.

At the beginning of our march, we had to hide our flags and fold them because of the number of police in the area. Upon gaining some distance, we were able to finally let loose our flags and proceed with the Pride March to the Cultural Center of the Philippines (CCP) Open Grounds. The participants were a mix of members of House of Iris Vito Cruz, Kabataan Partylist (KPL VC) Vito Cruz, Anakbayan Vito Cruz (ABVC), Kapit Kamay Alternative Learning Avenue for the Youth (KK-ALAY), and other Lasallians and Benildeans who were organized primarily by these organizations. As a member of one of these organizations, I’ve gotten used to the usual chants commonly heard in protests— chants like “Makibaka! ‘wag matakot!” or “Ang tao, ang bayan! Ngayon ay lumalaban.”

You can imagine the tenderness I felt when I heard the gay versions of these chants as a lesbian activist. “Makibeki! ‘Wag mashokot!” or “LGBTng Makabayan! Lumalaban!” As a part-time activist who frequents some protests, I’ve had some experience in chanting and walking alongside my comrades, and I could see how some of the participants were shy in joining the chants at first but eventually chanted along as we marched further.

The most notable chant for me would be “Ang pride! Ang pride! Ang pride ay protesta!” I noticed too that a lot of the participants found this chant to be the easiest to shout along to. I remember even my friends, who aren’t members of the organizations I mentioned, screamed their hearts out. It’s important to recognize, too, how LGBT+ people have suffered in the country. One of the chants calls for justice for Jennifer Laude, a transgender woman brutally murdered by a United States Marine, Joseph Pemberton. One of the chants calls for justice for volunteer Bakwit teacher Chad Booc, a gay activist whose life was cut short as a result of red tagging. This is how we remember.

Marching as a collective with purpose truly made Pride more meaningful and closer to its roots as an event historically sparked by riots rather than just a celebration. It’s a celebration that’s been historically fought for with blood, sweat, and tears.

It’s historically sparked by riots rather than just a celebration, fought for with blood, sweat, and tears

Upon reaching the CCP open grounds, I realized just how big the Metro Manila Pride really is. Our Taft Pride March was made up of 30 participants, whereas the entire Pride event had up to 30,000 participants. It was my first Pride event. I’ve been a participant and bystander in several mobs, rallies, protests, camp-outs, and other political demonstrations, but not a single one of them looked as colorful and as unique as Pride. I had the funny circumstance of having six friend groups come to Pride, and I joked with all of them that it was hard to look for any of them because even my friends and I were all dressed to the nines, so nearly everyone stood out.

Nearing the end of my stay at pride, my friend put his arm around me and told me he was sad. He said that his best friend, who was a trans man, would have loved it there. He told me his best friend died not too long ago from suicide, and he misses him every day, and seeing how so many people like him was happy at Pride made him miss him more.

Pride is a not-so-gentle and not-so-subtle reminder that for all of us, things could and will get better and we all have each other’s militant attitude to help make a future that’s ours. Happy Pride!

DISCLAIMER: The author’s real name has been changed to hide his/her identity