Benilde students face to face with the Lumads 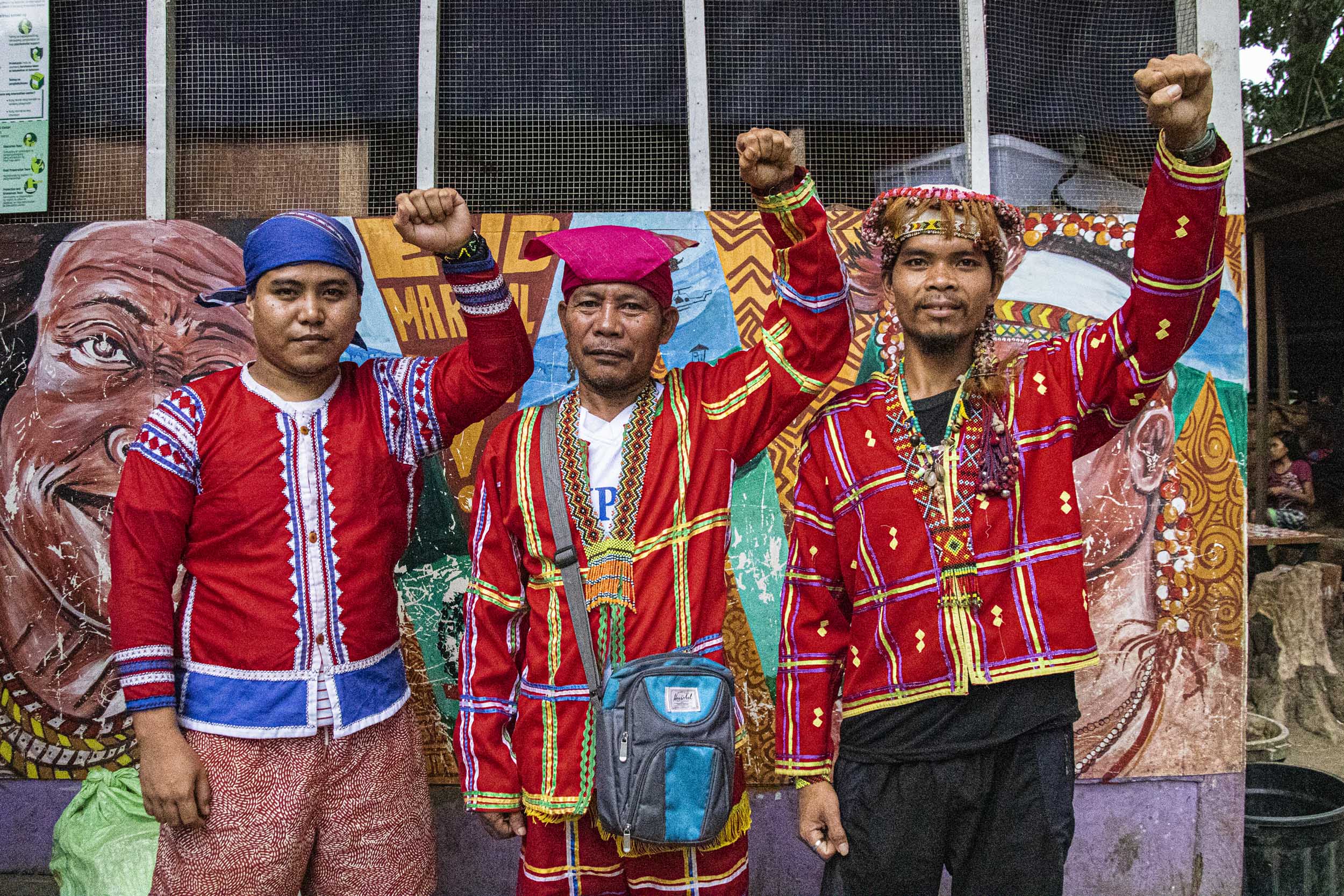 They listen to tales of unsolved mysteries, false promises and thwarted dreams of education

This article was originally published in “The Benildean Volume 6 Issue No. 1: Clickbait.” Date of publication: February 16, 2020.  It also received “The Most In-depth Feature Story Award” in the Best-Designed Campus Papers of the Philippines Awards

Touted as the “Murder City” in the 1980s, Davao City has continuously sought to turn around the tide of opinion. Just how credible is its claim as “one of the safest cities in the world”, and are its citizens—particularly those in the fringes, the indigenous Lumads—truly safe?

Access to education is one of the main factors of a progressive and healthy society. But for the Lumads, the road to progress and self-determination is a very risky journey. Even with the destruction of their schools and military operations against their community, they continue to fight for their rights and the future of their children.

Lumads, comprising 61% of the roughly 17 million indigeneous peoples (IPs) in the Philippines, are the largest IP group in the country. Although they were granted the “Indigenous Peoples’ Rights Act” (IPRA) in 1997, they are still victims of human rights violations. On October 8, 2019, the Department of Education (DepEd) formally closed 55 Lumad schools operated by the Salugpongan Ta’ Tanu Igkanogon Community Learning Center in Davao, affecting 3,500 students and 30 teachers.

To find out the story behind this, The Benildean interviewed Lumads, mostly Manobos, involved in the protest against this closure. Approximately 500 of these Lumad individuals, students, teachers, leaders, and secretary generals from different provinces were evacuated to United Church of Christ in the Philippines (UCCP) Haran, Davao City, to escape continuous military threats.

In 2019, online user-contributed survey site Numbeo ranked Davao City as the second safest city in Southeast Asia; while, in 2015, it was ranked as the ninth safest city in the world. However, the question of whether Davao City is truly safe or not is challenged by the Lumads who disagree with these claims. For five years, more than a thousand Lumads continue the fight for the right to education and self-preservation, even as the return to their ancestral lands remains elusive.

(That we are not meant to be stepped on by the government. That is what is important to us, the Salugpongan school. Because the school of Salugpongan, that’s what helps us to learn, us, the children of Lumads.)

Maylin is a grade 7 student at Salugpongan Ta’ Tanu Igkanogon Community Learning Center, and currently resides at UCCP Haran, Davao City, from Sitio Nalubas, Barangay Palma Gil, Davao del Norte because she evacuated her community along with her family. When The Benildean asked if Davao City is a safe place, she disagreed. Due to the occurrences of military men going to their area, she said Davao is an unsafe city for Lumads.

According to her, former Davao City’s mayor, now President Rodrigo Duterte, promised to help them by providing the permit to operate their schools, which he couldn’t do then due to his limited political power as city mayor. However, when he became president, he failed to fulfill this promise and rather imposed Martial Law in the region. His daughter, Sara Duterte-Carpio, who was elected new mayor, still failed to provide the permit. They believe this permit would have shielded them against military threats against their schools.

As they seek help for their education, their fellow datus (chiefs) and students are being imprisoned or killed—far from the kind of help they asked for.

Lumad children yearn for free education where they can learn to read and write. They perceive it as a platform for them to be able to fight injustices. Closing the Salugpongan schools thwarted their vision. According to Maylin, they believe the Salugpongan schools have committed no offense, making their closure a questionable and unacceptable act of the government.

In 10 years, she hopes there will be no problems in their daily lives as they live in their respective communities and receive proper education. Her appeal to the government is to have the Permit to Operate for their schools and receive the proper help they need.

(The military forces keep chasing us even if we are just staying right here in Davao.)

Annalyn teaches General Education at Salugpongan Ta’ Tanu Igkanogon Community Learning Center. She lives in Talaingod, Davao del Norte, but is relocated at UCCP like Maylin. She graduated from Mindanao Interfaith Services Foundation, Inc. (MisFI) Academy and finished her high school at Salugpongan before she decided to return as a teacher in the Lumad schools. Students in their schools, she discovered, are fast learners, willing  and eager to learn.

She said Davao is unsafe for Lumads since their demands or needs are disregarded because even President Duterte did not fulfill his promise. Analyn said the real reason behind the closure of the schools could be the government’s interest on their lands, including the Pantaron Range which they wish to preserve and protect.

Her appeal to the government is that they receive the Permit to Operate for Lumad schools, and to end Martial Law.

Her prayer is that they are able to finally go back to their communities.

(Our fellow Lumads who have been protesting for our ancestor’s land, 15 of them were killed during President Duterte’s administration, but we will continue to fight. We are asking for help from other institutions for us to be able to go back to our community.)

Benito, a father of seven, said he has not worked since 2013. After their evacuation to UCCP Haran, different non-government organizations, religious institutions like donations from Baclaran church, and other student volunteers from Ateneo de Davao, and UP Mindanao, to name a few, have helped the Lumads. Through the Rural Missionaries of the Philippines and other support groups, the Salugpongan school was accredited in 2007.

However, facing accusations that they were affiliated with the New People’s Army (NPA), Lumad schools were forced to close down, leaving their staffs as bakwits (evacuees) yearning for safety. Lumped with NPAs in social media, the Lumads suffered human rights violations, some were tortured to death, including Benito’s cousin, Obello Bay-ao, a Grade 6 student who was killed in 2017.

(President Duterte has a relative in Ulticon Builders. They wanted to build in Pantaron Range. If they destroy the mountains, a lot of people will be affected. All we want is to live in peace, and for our children to get an education. But the military took our land after they entered the [Talaingod] community.)

Datu Bay-ao said that Davao City is unsafe for Lumads like them. He shared stories of government harassment, shooting in schools, and evacuation centers being burned down. In 2015, Bay-ao was ambushed by armed men whom he claims were police.

(Why do they want to close down our schools? They say that it is because our school teachers have been accused of teaching how to dismantle weapons. But that is not true.)

As a father of six children, Sec Gen. Mansomoy believes Lumad schools should be allowed to operate because many of them can’t afford to send their children to public school. Lumad schools also teach children how to preserve and safeguard their culture, such as traditional agricultural and healing practices. The secretary general of Salugpongan Ta’tanu Igkanogon explained, “Kapag matuto na kami bumilang at bumasa, hindi na kami maloloko.” (Once we learn how to read and write, we would not be fooled again.)

(We’ve already experienced so much during Duterte’s Martial Law. We can only visit our farmland for only one to two hours. Any longer, and they’ll say we’re escaping to the NPA… They also pushed us to sign documents they say were part of a ‘census’, but they’re actually meant for us to surrender to them.)

The accusations that they are NPA rebels also add to their already growing list of struggles. “May ibang kapwa naming mga Lumad na pilit na inaarmasan nila.” (Some of our brothers are coerced into holding weapons.)

(We know they want to kill us even if we’re already living here [in Davao City] and have already left our community. We thought we were safe. Apparently not.)

(Whether we like it or not, there is a war taking place—especially here in Mindanao.)

Jong Monzon is secretary general of the PASAKA Confederation of Lumad Organizations in Southern Mindanao. He said that while many non-Lumad residents of Davao City feel safer, crime and the war on drugs still pose a threat to security.

In contrast, the Lumads find it more difficult to live peacefully in the city, after having experienced harassment in the hands of government forces as they defend their ancestral domain.

Their constant and firm attempts to air their demands concerning education, health, and agriculture to the Department of Justice (DOJ), DepEd, Commission on Human Rights,

In an interview with The Benildean, he said that the people in government, particularly in NCIP, care more about their own interests rather than the welfare of the Lumads, using their position to further business deals with mining companies. He added that the “Indigenous Peoples’ Rights Act” only serves those who own properties or have ancestral domain titles. Lumads see life in trees, leaves, rocks and rivers in their ancestral domain—taking these lands from them, according to him, violates their human rights.

(Instead of building more, they closed the schools. There are around 100 schools in the community, all of which they destroyed.)

Lumad teachers teach patriotism and practical skills. Grade 7 students are taught how to check human vital signs, conduct acupuncture, and take blood pressure. He believes that this literacy is seen by the government as a threat to some vested interests.

Harassment and red-tagging are just the tip of the iceberg. But it is a large tip.

Jong Monzon narrated that in 2017, two Lumads were detained by military forces who accused them of being NPA rebels; they were tortured and burned to death. A Lumad child was killed after being tagged as an NPA member.

Many Lumads now live in fear, even as they travel, thinking that theycould be the next targets.

Despite Davao City’s claim as one of the safest cities in the Philippines today, the Lumads don’t feel safe. They claim to experience threats and persecution by those in power. Their pursuit to communicate legitimate demands to the government, as well as to educate themselves, resulted in broken promises and deaths of their kin.

The right to finally forge their own destiny.