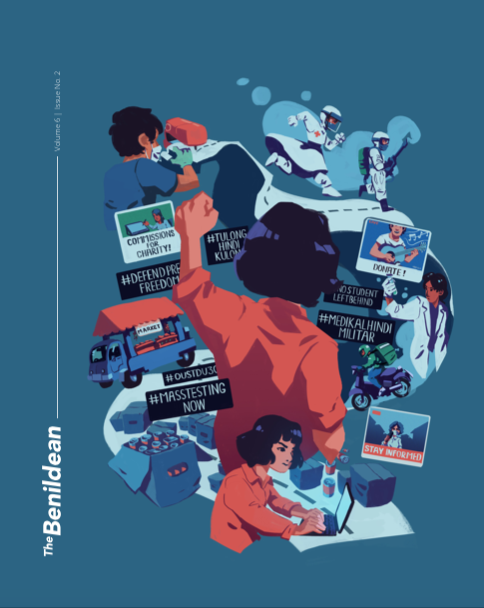 The Best-Designed Campus Papers of the Philippines (BDCP) Awards gave six recognitions to The Benildean Press Corps (BPC), the official student-journalist’s organization of the De La Salle-College of Saint Benilde, for its inspiring feature stories and innovative news layouts.

Hosted by BDCP Designers and Creatives PH, Inc., the creative arm of Aloha Events and Marketing Solutions (Aloha PH), the BDCP Awards is the first and only nationwide award-giving body that acknowledges and celebrates the visual and creative excellence in the content and news design of various Philippine campus publications.

BPC received The Most In-depth Feature Story Award for Unsolved Mysteries And False Promises: Lumad Edition by Marinel Peroy and Beatrice Quirante. The exclusive article, which debunked Davao City’s claim of being one of the safest cities in the world, narrated first-hand stories of the Lumad people and their outcry for their land and their right to education.

BPC likewise earned The Most Inspirational Feature Story Award for Br. Dodo: When an artist becomes a leader. Written by Marinel Peroy and Zophia Emmanuelle Tendido, it introduced Benilde’s Brother President, Br. Edmundo Fernandez FSC, as an artist and an excellent service-oriented leader with a vision of strengthening the college as a forward-looking institution.

The Best Frontpage Design and Best Features Spread Design were clinched by The Benildean (Clickbait Issue), BPC’s magazine-journal that delivered the truth behind the rumors, claims and stereotypes through interviews with victims and practitioners.

The Benildean (Updates Issue) likewise received the Medallion of Visual and Creative Excellence Award for being one of the Top 10 Best-Designed Campus Papers of the Philippines.

The Benildean (Clickbait Issue) was also nominated for the Best in Photo Editing, Most Child-Friendly Design, and Best School Paper Color Schemes Awards while The Benildean competed for Best Infographics.

BPC was a top contender in the following categories: Fire it Up: Can the Philippines take the heat by Bea Mendoza for Best SciTech/Innovation Story; Under (Green) Pressure by Anna Laganzon and Aaron Metierre for Best Environment Story; and Ok, Boomer, Let’s Play The Blame Game by Marinel Peroy for the Most In-depth Feature Story.

For its second season, BDCP, which recognized the campus papers from grade school to tertiary levels, received 197 entries under 34 categories. The applications were meticulously screened by a roster of industry experts comprised of local and world-renowned graphic designers, art and creative directors, layout artists, esteemed campus publication specialists and established journalists from various publishing and news agencies.

The virtual ceremony, which reminded the student-journalists of their crucial role in carrying the banner of press freedom and ethical journalism, was conducted through the official Facebook page of BDCP Awards at (https://www.facebook.com/bestdesignedph).